The Unique Artistry of Childish Gambino 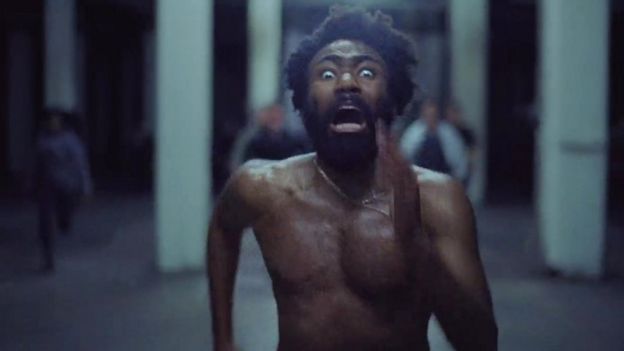 “Immature poets imitate; mature poets steal; bad poets deface what they take, and good poets make it into something better, or at least something different.

There’s been a lot of hubbub lately about Childish Gambino (Alter Ego: Donald Glover) and his apparent plagiarism of underground rapper Jase Harley’s “American Pharaoh” in his nation-sweeping smash hit, “This Is America”.  While I won’t claim that these accusations are completely unfounded, in my opinion these reports have been greatly exaggerated.  Yes, they both begin with a choral intro transitioning into an afro-pop/ trap beat instrumental and feature lyrics with similar themes.  They are, however, very different.  “American Pharoah” is an anthem of triumph over oppression that cleverly uses Biblical and historical allusions to convey its point, and catchily at that. (Actually, Jase Harley has a lot of fantastic stuff, check him out!)  “This Is America” is a piece of performance art that combines audio with Hiro Murai’s fantastic directorial chops to create a truly unsettling but enthralling experience.  It apes contemporary rap music’s increasingly stereotyped characteristics like minimalist triplet flows and ad-libs delivered by Quavo, Young thug, and 21 Savage.  In its imitated simplicty, it is extremely complex.

However, whether or not Glover was inspired by Jase Harley is not really a question.  It’s pretty clearly impossible that he (or someone working with him) wasn’t somehow influenced by it, but the fact remains: borrowing, stealing, whatever you call it, is something Donald Glover has been doing for years.

To begin, let’s first listen to a classic track from Funcadelic’s 1971 Maggot Brain.  For the purposes of the point I’m trying to make, I recommend listening to it at 1.25 speed.

Now listen to this, a track from Gambino’s 2016 masterpiece Awaken My Love.

These songs even have weirdly similar album covers.  Nothing obvious that anyone would notice right away, unless the two photos of just a woman’s head were placed side-by-side.  That riff isn’t stolen — it’s original, and fantastic at that.  In using it in his song, Gambino evokes a long history of funk music and places his own music on that timeline.

It doesn’t stop there.  Atlantia, the FX show written by Glover and almost exclusively directed by Hiro Murai, borrows a lot from storytelling devices long used by black artists.  Not the way that writers usually borrow from literature — with parallel plot events (Basically any Coen Brothers film and its use of The Odyssey comes to mind).  Glover instead writes scenes in a way that is reminiscent of past material, but in no way derivative.  There are some moments in the show that immediately bring to mind Ralph Ellison’s Invisible Man, the 1952 novel that brought to bear some revolutionary ideas about black identity in segregated America.  Not because of similar events, but because the two elicit a similar feeling of fearful confusion.  Take the man on the subway in the show’s pilot episode: he offers Earn a sandwich, and inexplicably becomes angry when Earn refuses to eat it.  It’s moments like this that nightmares are made of — bizarre enough to be unsettling, but lingering because of the real-life fabric of which they’re woven. Much like this scene, there is a really odd moment in Invisible Man when the book’s nameless narrator is suddenly detained by a group of scientists and experimented  upon without explanation whatsoever.

Another moment in Atlanta is more of a parallel happenstance, in which over the course of an episode, Earn is approached by a woman appearing to know him, apparently having him confused with an old music industry contact of hers.  She gets him admitted into a party in which he begins meeting people, people who could give his managing career a much-needed boost.  But then the rug is pulled out from him when she menacingly whispers that she knows what he did, how he stabbed her in the back.  His assumption of a false identity comes back to hurt him, just as when the Invisible Man‘s Narrator assumes the identity of Rinehart, his apparent dopelganger with whom people keep confusing him.  Everything is fantastic, Rinehart seems to have a great life, until the Narrator runs into Rinehart’s enemies.

There are also many events throughout the series that are reminiscent in content to the “White Peacock” scene in Toni Morrison’s Song of Solomon.  This is a book that has been hugely influential in its motiefery (recently very notably in Ta-Nahesi Coates’ run of “Black Panther,” in which he has translated Morrison’s themes of flight and its many meanings brilliantly into a super-heroic narrative) and mined for meaning by scholars for decades.  The scene is interpreted by many as an illustration of how white wealth or old money holds down those that possess it.  The white peacock cannot fly away because the lavish jewels it wears are too heavy for it to leave the ground.  Personally, I feel this scene stands in Morrison’s story simply as a bit of honest-to-goodness magical realism.  Season 2’s Teddy Perkins, or S1, E8’s “Invisible Car” fit this description.

In the Atlanta episode “Juneteenth”  Earn and his girlfriend attend a party at the house of a rich white man, who is comically fascinated with African American culture.  During a scene, in his “Man Cave” of sorts — adorned with various artifacts from African Culture, Childish Gambino’s Awaken My Love is visible.  This clever placement could mean a few different things.  Is it a reference to the phenomenon that Glover has spoken about early and often in his career that his art is consumed by white people who don’t truly get it?  Is it just a simple Easter egg for fans avid fans?

I posit that it stands for something else entirely.  Donald Glover has spent his career sending up and modifying for new use past celebrated black art.  By doing what he does — stealing? borrowing? sharing? — Glover is placing himself and his art within the canon of African artists, and joining his place among the greats.