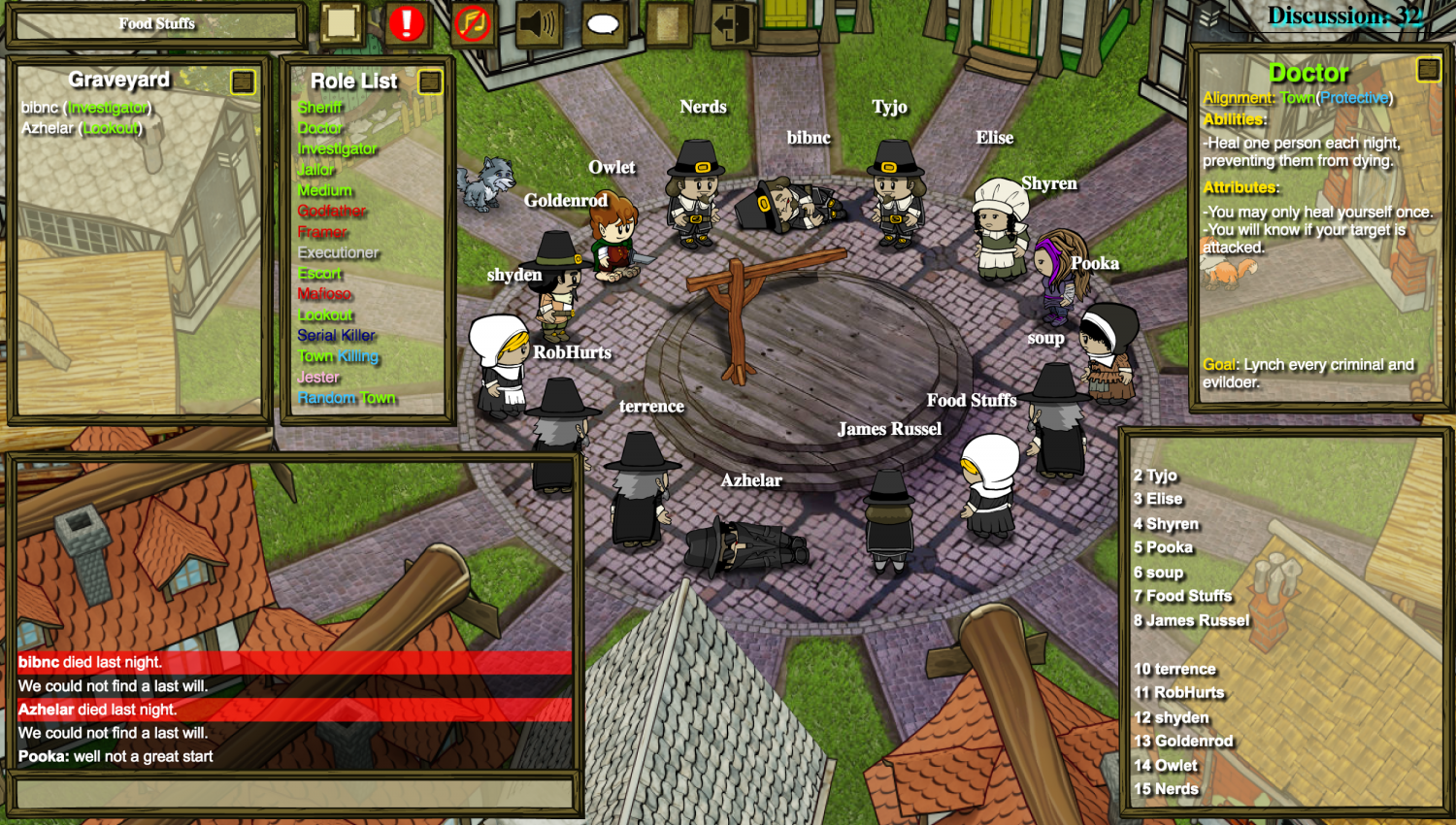 Most of us are familiar with some variation of the party game mafia.  Some know it as Assassin, Werewolf, or Serial Killer.  The game is very simple.  People use some form of random selection like a hat full of names to decide who will be the killer; sometimes there is a medic, or a policeman; and the rest of the people are citizens.  Everyone closes their eyes and the killer opens their eyes, points to who they are going to kill, and then closes their eyes.  Any other roles follow suit and then everyone opens their eyes.  The game-master (that title isn’t official) relates what happened last night.  Its more fun if this is done with a needlessly elaborate scenario.  Town Of Salem is essentially a browser-game amalgamation of all of these games, facilitated by a computer program which eliminates the hassle of needing a human being to run the proceedings.

As with all things internet, this does sometimes get taken less seriously than it might in real life.  It is common for users in a pregame lobby to agree upon a theme for their names — fruits, politicians, and movie characters are common choices — and base in-game choices upon these names.  Orange constantly bodyguards Apple, but it turns out that the player named Batman was actually killed by Joker.  All this while players poke fun at one another with memetic sayings and alternate curse words to which the server auto-corrects (“flummery”, “tarnation”, and my favorite “child born out of wedlock”).  TOS is a tightly managed server with very little room for cheating or anything else gamebreaking.  The real issue is the game itself, which is easy to play, but nearly impossible to master.

Here’s a little play-through from youtuber InHouse Gaming to give you a feel for the game.

As you can see, the odds of winning the game are not usually in your favor, as roles are chosen randomly and many roles, such as the serial killer have the odds stacked against them.  A win as a role like that one can come down to something as small as a well placed comment in that chat log that sways mass opinion away from your own guilt, and towards the innocent townie who’s claim to the role of Medium seems just a little suspicious.  Conversely a serial killer that systematically takes out all the townspeople under the radar runs into a brick wall when all that are left are mafia who outnumber them.

Town of Salem is a bizarre test of one’s digital pokerface and their ability to act natural while psyching out fourteen other players.  It is a weird marriage that pits nervous teamwork against incognition, trust against doubt, and logic against luck.