Judah And The Lion, Colony House, and Tall Heights

A couple of weeks ago, I went to see one of my favorite bands: Colony House at the 9:30 Club in Washington D.C.  They weren’t really headlining, Judah and the Lion was.  I had never really given their music much of a shot — I’d heard a few of their songs on the radio and it kind of just sounded like basic alt-rock.  Everything I had read indicated a weird mix of Rock, Hip-Hop, and Folk Music but I felt like that wasn’t the case; it mostly felt like alt-rock with some banjos.  but hey, a concert’s a concert I figured.  Tall Heights took the stage first.

Theirs was one of the most electric opening acts I’ve ever seen.  It was clear that they knew their place.  Their allotted portion of the stage was so cramped that the musicians could barely move, and yet the Boston trio played with the energy to fill an arena.  Frontman Paul Wright played a cello on a strap with some pretty heavy preamp effeccts on it.  Most of the time he used it as something of a more organic sounding synth, but a few high points saw him shredding it like a guitar.

Then Colony House came out and played the best show I’ve seen them do yet…I’ve seen them four times.  I feel kind of a weird relationship with CH, having been there at NEEDTOBREATHE’s “Tour De Compadres” where they were the opening act for the opening act, to now where they are playing second billing at sold out shows.  They’ve grown as a unit each time, their stage game getting tighter and tighter.  They still set up in a slightly unique manner, with drummer Will Chapman positioned on the left of the stage and keyboardist Parke Cottrell taking the back space where the drum riser normally is.  Will’s brother Caleb takes center stage in front of a giant neon sign — evoking images of a 50s truck stop — that ties the whole thing together.

For about 40 minutes the band rocked out with an indescribable energy, most notably to their riff-rock banger 2:20.  My one regret is that the considerably hipster crowd didn’t seem to want to mosh, all that standing in one place is tough on the legs.

Finally, It was time for the main event.  Maybe fifteen minutes passed, and spotlights began to swing about as lights dimmed. David Bowie’s “Life On Mars” began to play and attention turned to the stage.  The song ended, and faded into a spacey, ambient backtrack.  The crowd was ready for the band to come out…only it didn’t, for ten more minutes.

After an agonizing and confusing wait, someone walked out and turned on a booming hip-hop beat with an echoing artificial clap sound.  From out of nowhere a disembodies auto-tuned voice began chanting.  The rest of the band walked out dressed in all manner of bizarre attire.  A guitarist with princess Leia buns, a mandolin player in pink flowered overalls and the lead singer, Judah wearing a white Steven Curtis Chapman (Will and Calebs father) t-shirt.  He picked up a white guitar and they launched into their early adulthood anthem, “20 something”. 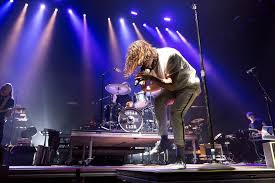 Throughout the show, the band completely proved wrong my original assessment as they fused 808 laden trap beats with dizzying banjo solos and fist-pumping power chords.  Cutting the fat off each genre for the most fun experience possible J&TL’s focus seems to be on fun.  Judah is one of the most eccentric performers I’ve ever seen.  Engaging in silly dance moves, sillier callouts and occasionally pulling  his shirt up over his head so it covered his face (true story, he did it like five times).  During the performance of the band’s hit single, “Going To Mars!” Judah left the stage and reappeared in the club’s balcony.  Standing atop a small barrier wall, practically touching the ceiling screaming out the song’s chorus “We, can do anything we want/ We’re going to Mars!”.