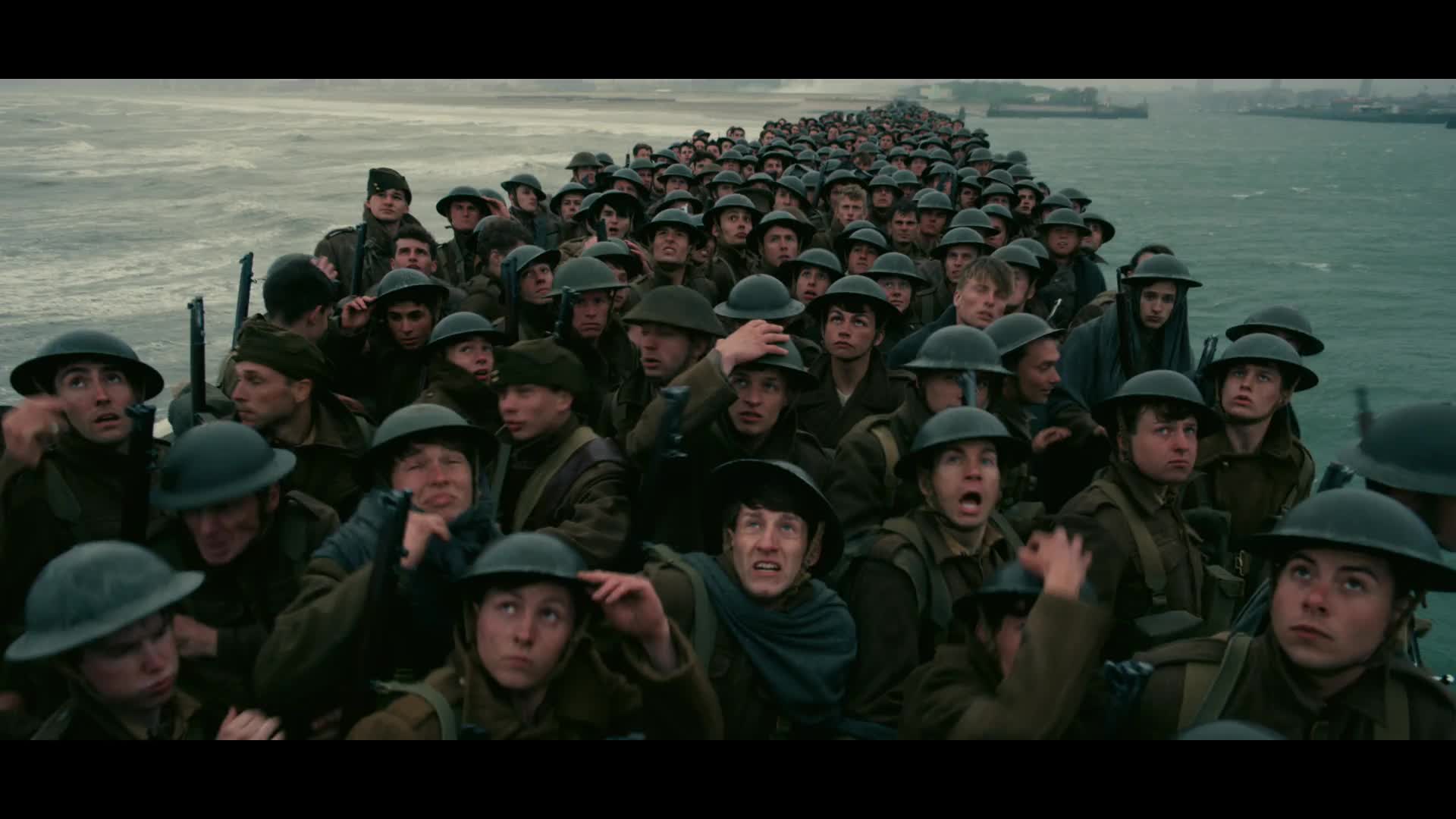 The shots ring out in a french street, alarming the casual moviegoer.  Their origin is unknown, but their danger is not.  Young men run for their lives, but are cut down.  A soldier, barely more than a kid, fumbles with his weapon, trying to prepare it for battle as the ticking clock escalates, and gunfire blasts splinters off of the gate behind him.  Dunkirk‘s first scene is the directorial equivalent of a teacher whistling for the attention of the class or an angry parent grabbing the chin of the child they address.  Christopher Nolan — The master — has stepped up to the podium.  We had all better listen to what he has to say.

And speaking of saying things, Nolan’s characters do precious little of it in this film.  Like actual war, there is little time for ramblings on about life back home, or philosophical musings about humanity.  Nolan lets his spectacle do the talking, and we hear his message far more audibly via images of destroyers and fighter planes, than we do from any forced development of character.  It is natural that many people may be turned off to the movie, because of its poor (or rather nonexistent) character arcs.  It is a risk that Nolan has chosen to run, and a very intentional one at that, because in knowing next to nothing about our protagonists, we can surmise no reason that we might not be them; thrown headlong onto a plane of horrors just as they are.

Nolan does an excellent job of documenting this event, and his expertise is only more evident when seen in imax as it is intended to be.  From wide shots of a never-ending beach, to tense closeups of a man on the verge of drowning, to the breathtakingly beautiful ocean that fighter planes wage war above, the landscape of this film is milked for every last drop of its potency, and the real-life machinery adds that vintage touch of authenticity that a movie like this needs.

The chief drawback of Dunkirk is the fact that it only reinforces my belief that Christopher Nolan is trapped in storytelling box of his own construction.  Owing his success to films like Memento and The Prestige he clearly feels compelled to play around with the chronology of his storys.  The problem here is that it isn’t Nolan’s story, but Britain’s, and in a sense, the world’s.  The chopping and rearranging of Dunkirk neither increases its enjoyability, or comprehensibility.  Instead, the casual viewer with no knowledge of the actual historical event if likely to be baffled, and the history buff confused as to why Christopher Nolan could not — for once in his life — check his ego and tell a straightforward narrative in the order it actually happened.

There is a deep, and unspoken poetry to this film.  As the movie concludes with celebrations in the street, we see a lone pilot’s plane, empty of fuel, drifting with stilled propeller over the city.  With an even higher vantage point, the vehicle’s strange mobile stasis takes on an almost dreamlike quality; unreal, though we know that in actuality, the plane is as real as can be.  As Tom Hardy’s pilot disembarks, and sets his bird aflame, we hear Winston Churchill’s famous statement read from a newspaper–

— while he is captured by German soldiers.  The actions spell defeat, but viewers can see victory in his eyes, and satisfaction, at a worthwhile battle well fought, and well won.

As I evaluated this film, like I generally do on the drive home from the theater I came to the conclusion that, when held up to the template of a perfect movie, Dunkirk is severely lacking, in many respects.  Frequently, we as a society seem to want the perfect movie; a film that balances complex storytelling with humor, action, and a vital message in some cases.  Dunkirk is an inarguably flawed movie but like an amputee that gains strength in his remaining limbs, Dunkirk specialness lies in its success without these things.  I for one was refreshed to know that there is still such a thing as a director, who will sacrifice such things as meaningful dialogue, wit, and arcing storylines to create something that can be seen — nay — felt, nowhere else.